Inside the Criminal Mind 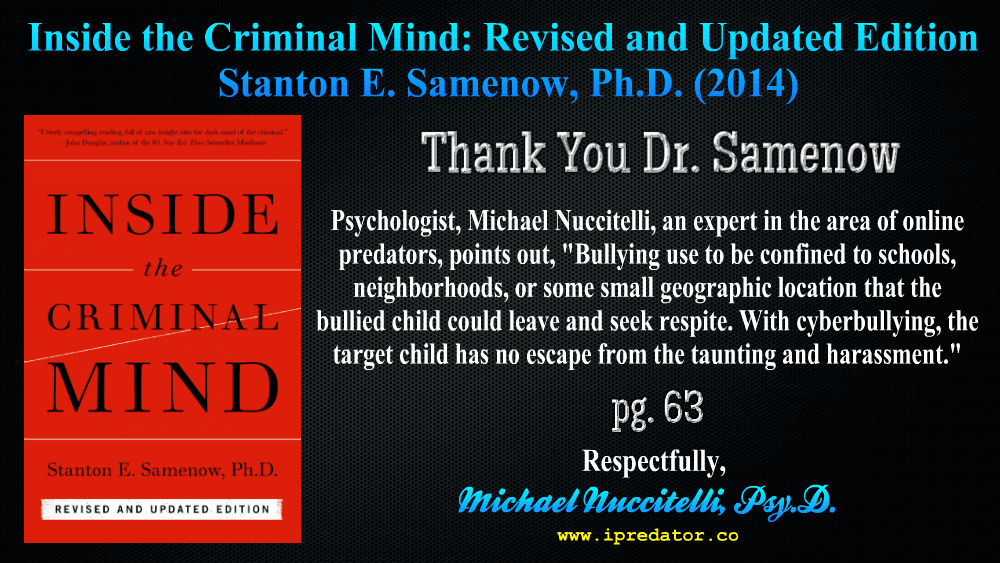 Inside Cybercriminal Minds: This web article is dedicated to Stanton E. Samenow, Ph.D. for his kind gesture to quote me in his recently published book, “Inside the Criminal Mind: Revised and Updated Edition“ [November 2014]. My first contact from Dr. Samenow was an email he sent in 2013 complimenting me on my iPredator cybercriminal concept. Not believing Dr. Samenow would recognize my work and then follow-up with an email, I spent the day verifying it was him who had written. Sure enough, it was Dr. Samenow and I was truly honored. To have one of the fathers of modern forensics and criminology notice your work can only be described as humbling.

Fast forward to October 26, 2014 and I am once again honored to have Dr. Samenow write me another email with the announcement of his revised and updated edition of “Inside the Criminal Mind: Revised and Updated Edition” to be released on November 4, 2014. I immediately wrote back thanking him for contacting me about his upcoming release and a request to one day have the opportunity to speak with him to discuss iPredator and what I envisioned to be a discussion about the Criminal Mind vs. Cybercriminal Mind. Dr. Samenow wrote back the following message, which I will never forget. He wrote, “I may be able to do this on Wednesday. I did quote you on p. 63 of the book. Stanton“. Let’s just say the number, 63, has now been allocated to my favorite numbers group. Upon purchasing his book and immediately going to page 63, Dr. Samenow wrote as follows:

Psychologist, Michael Nuccitelli, an expert in the area of online predators, points out, “Bullying use to be confined to schools, neighborhoods, or some small geographic location that the bullied child could leave and seek respite. With cyberbullying, the target child has no escape from the taunting and harassment”.

I cannot thank Dr. Samenow enough other than offering my insights into what I believe is no longer the criminal mind, but cybercriminal mind. With Information and Communications Technology (ICT) rapidly enveloping all aspects of human existence, it is fair to assume criminals, deviants, the severely disturbed and angry find cyberspace to be an excellent environment to target others.

iPredator is a global term used to distinguish anyone who engages in criminal, coercive, deviant or abusive behaviors using ICT. Central to my construct is the premise that Information Age criminals, deviants and the violently disturbed are new classifications to humanity. Furthermore, I do not subscribe to the notion that criminals and deviants use cyberspace and ICT merely as tools to carry out their harmful plans. Not just criminals and deviants, but all inhabitants of the Information Age are becoming dependent upon ICT, social media, virtuality and anything digital. Inside the cybercriminal mind, the reality-virtuality continuum runs rampant. In honor of Dr. Samenow’s prolific work, I provide the reader my recent concept definition of Online Psychopathy.

“Darkside of Cyberspace is a metaphor and conceptual framework defining a virtual environmental realm that includes all criminal, deviant, deceptive, harmful and malevolent activities in the abstract universe of cyberspace. Whereas iPredator is a criminal, deviant and disturbed typology construct, Darkside of Cyberspace also includes legal and illegal online activities, as well as destructive and self-destructive online behaviors.” Michael Nuccitelli, Psy.D., iPredator Inc. [2013]

Online Psychopaths [aka, iPredopaths]: iPredopathy is an Information Age criminology and human consciousness construct replacing the pre-Information Age profiles of sociopathy and psychopathy. iPredopathy is an advanced stage personality disorder describing any adolescent to adult male or female who skillfully uses Information and Communications Technology [ICT] to troll, identify, control and manipulate their human targets.

Driven by grandiosity, sexual perversion or perceptual distortion, Online Psychopaths and iPredopaths experience no remorse or shame for the harm they cause others. Just as iPredators, many iPredopaths do not break the law and live unscathed by law enforcement, fraternal organizations, religious institutions and the legal system.

In addition to being devoid of remorse and shame, iPredopaths are extremely grandiose, habitually deceptive and highly dependent upon ICT to fuel, define and justify their dissociative perceptual fantasies. iPredopaths are similar in core beliefs to pre-Information Age psychopaths, but differ in behavioral signatures, stalking methodologies, choice of hunting environments, and psychodynamic faculties.

Although at much higher rates of engaging in violent, sadistic and severely depraved behaviors than the general population, most iPredopaths are not homicidal, sexually perverted or overtly violent. In fact, using the persuasive and deceptive power of cyberspace, iPredopaths are capable of embarking upon offline opportunities endeavoring to become heads of state, corporate and community leaders, successful religious zealots and members of the political elite. 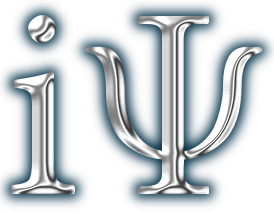