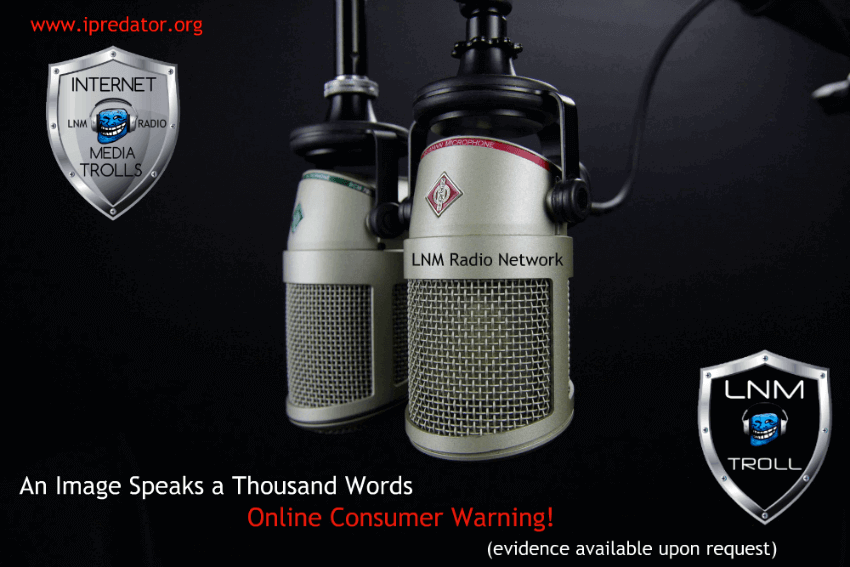 It’s been about a year since this writer has had to document the defamatory, deceptive and disinformation practices of an unknown internet radio show host by the name of Michael Vara of the LNM Radio Network. Once again, Mr. Vara is engaging in his adolescent online nonsense as predicted in this writer’s internet troll and Troll Triad concept authored in late 2014. Thanks to fellow internet safety associates, this writer was informed of his new disinformation campaign. As this writer has always only published statements of fact about Mr. Vara and other iPredators, the following information is factual and was compiled with due diligence.

For interested parties who research Michael Vara’s online content, it is highly probable his outlandish allegations will include that this writer is both cyberstalking him and slandering his reputation. This writer has not thought about Michael Vara or LNM Radio until his recent internet radio disinformation campaign. Just as he blustered in the past, he will announce to his followers that he’s retained legal representation to take this writer to court. His allegations are unfounded and without merit. Provided below is a brief overview of Michael Vara’s nefarious online activities using internet radio and social media.

Michael Vara has published an amateur video, which he has been disseminating throughout social media. In addition to spreading his vitriol throughout social networking sites, he has also sent his video to past internet radio show hosts this writer was interviewed by in 2015. Michael Vara has also recently adulterated many this writer’s internet safety and cyberbullying prevention educational images. Provided here are image Exhibits I & II verifying his childish actions. It is relevant for the reader to understand that Michael Vara is a grown adult, 43 years old and allegedly married with children. Please note that these exhibits are a fraction of the images he has ruined. To date, this writer has compiled 80+ internet safety themed images Michael Vara destroyed that this writer designed and disseminated as public domain for educating parents, educators and pediatric professionals. 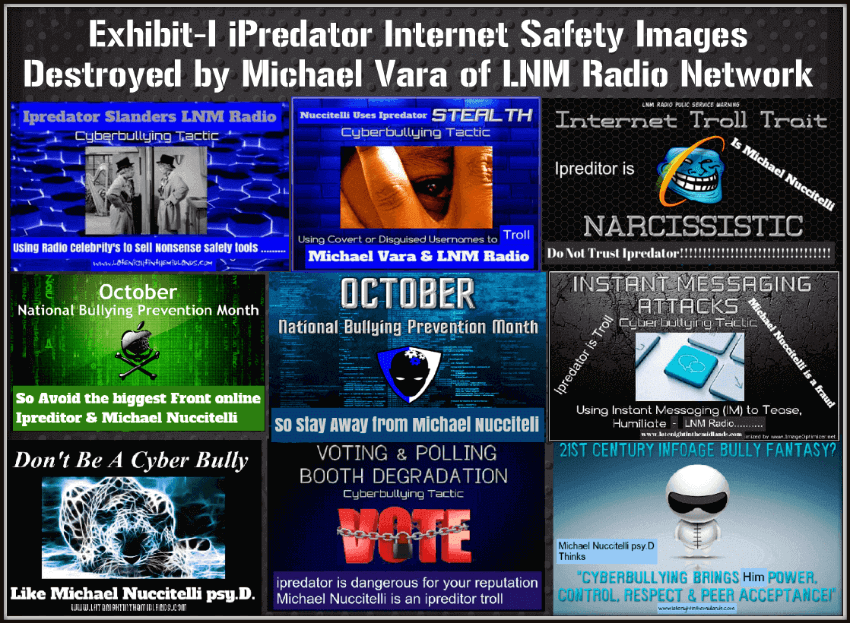 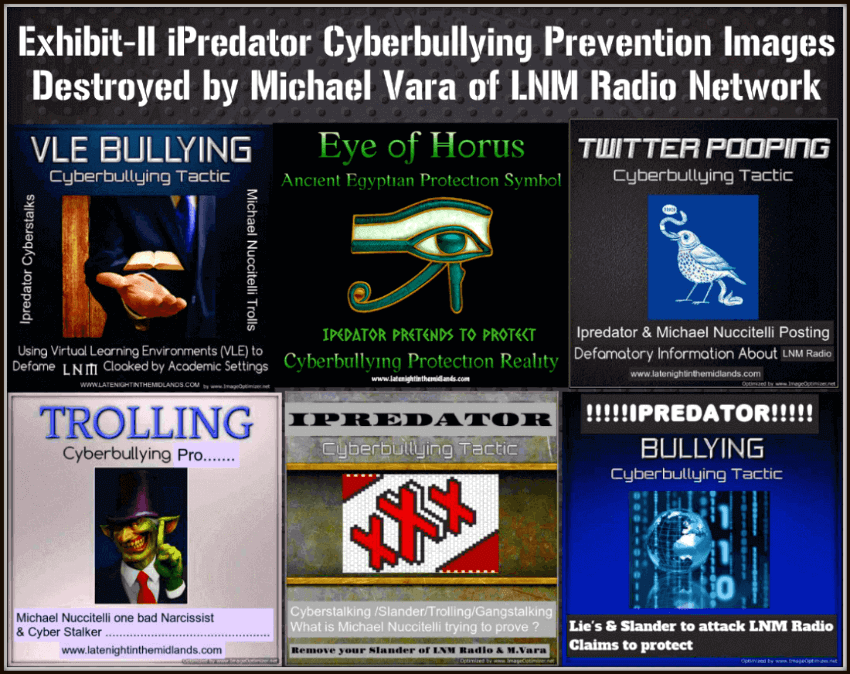 Although this writer is unable to confirm if Michael Vara is gainfully employed or not, he has a lot of free time. Production of his one-hour video, altering 80+ internet safety images and mass posting defamatory information online is both laborious and time intensive. Recently, his online deceptive practices have begun to alert other online users. Pasted below is a recent incident validating Michael Vara’s extensive levels of false advertising and deception. Dating back to early 2014 and documented in this writer’s online articles, Michael Vara has promoted himself as an internet safety expert having been involved in the field since 1999. Below is pasted what he disseminated to the public in his G+ social profile until recently being confronted by one of his internet troll associates.

As you can see by viewing image Exhibit-III, Michael Vara is and/or was recently a member of a known internet troll community called “The CAIN and ṤⱧǠ ᴆŐƜ hypocrisy”. Like many groups of internet trolls, who gather online to revel in targeting vulnerable online users, Michael Vara joined this teen community to exchange and disseminate defamatory information about this writer. Given that trolls will be trolls, a community member confronted him about his felonious G+ profile biography. The troll’s comment is easily visible in image Exhibit-IV. For some unknown reason, Michael Vara removed his felonious content within 36 hours of being confronted. His old and new biography is pasted here for your review after the two exhibit images. To inspect his recent defamatory posts, provided here is Michael Vara’s Facebook profile link. 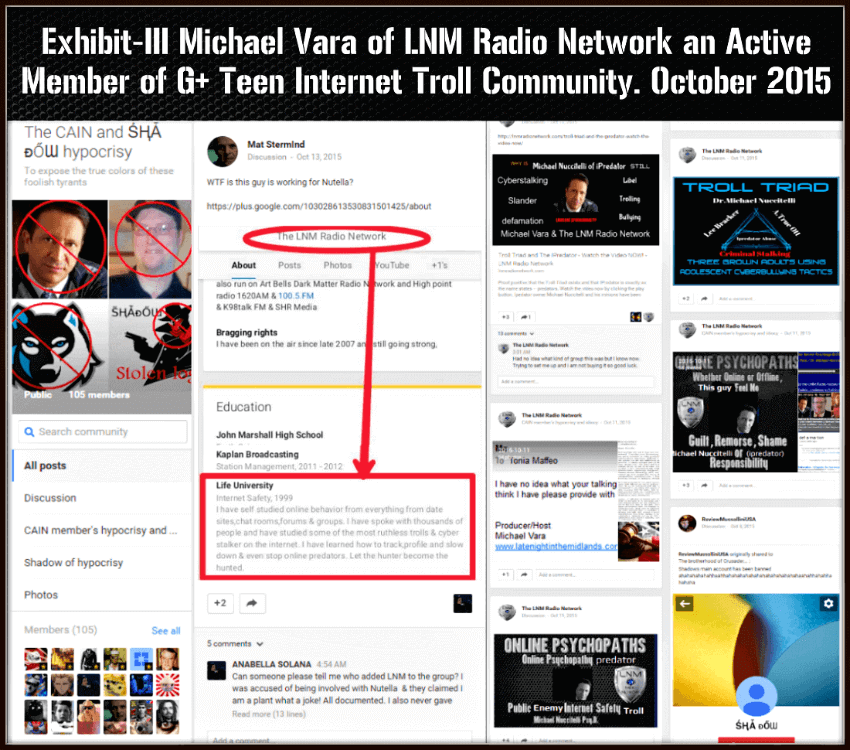 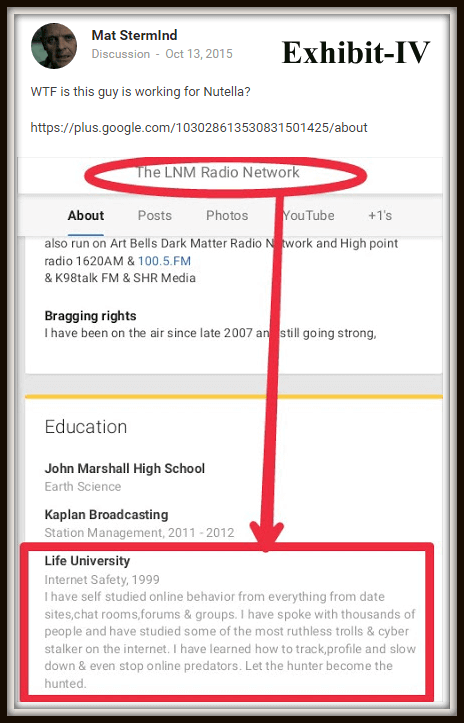 On October 13, 2015, a member of the The CAIN and ṤⱧǠ ᴆŐƜ hypocrisy G+ internet troll community posted a screenshot and comment (See Exhibit III & IV Images) of Michael Vara’s felonious claims alleging he has extensive experience profiling internet trolls and online sexual predators. Within 72 hours of being confronted about his hollow claims, Mr. Vara’s cybercriminal profiling embellishments have been replaced with the content that follows.

I have self-studied online behavior from everything from date sites, chat rooms, forums & groups. I have spoken with thousands of people and have studied some of the most ruthless trolls & cyber stalkers on the internet. I have learned how to track, profile and slow down & even stop online predators. Let the hunter become the hunted.

I started LNM Radio in late 2007 and have interviewed thousands of guests on hundreds or topics and through it all I am slowly putting together the puzzle we call life. Why are we here? who are we? where did we come from and how did we get here? what happens when we die? do we cross over? My studies go further than even that such as the true history of this planet and our connections with other planets such as Mars. Technology that existed 11,500 years ago. I want answer and the only way you get them answers is by seeking them. 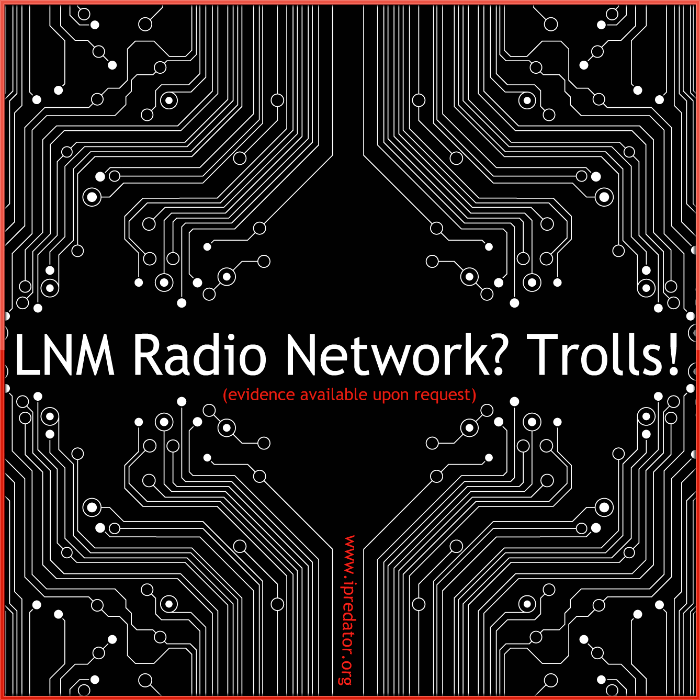 This writer has an entire database of evidenced verifying Michael Vara’s amateur attempts to defame this writer. Without going into the psychodynamics and modus operandi for his pathetic behaviors, it’s fair to assume he is angry man riddled with grandiose fantasies of one day becoming nationally recognized. Despite his foolish attempts at destroying this writer’s reputation, this writer hopes he succeeds one day. Unfortunately, and supported by clinical research, his probability of succeeding is non-existent. A person who motivated to succeed in life does not spends hours disseminating defamatory information about others.

Feeling confident of having accurately profiled Michael Vara, it is likely he will be financially destitute in 2016 pleading with his listeners to donate funds to keep his withering internet radio network afloat. Although he would be considered an old man, from internet troll standpoint, his behavioral profile parallels recent research suggesting internet trolls are a much higher rates for narcissism, sadism, psychopathy and Machiavellianism. Having known Michael Vara for four years as both a friend and adversary, he clearly exhibits these personality traits. 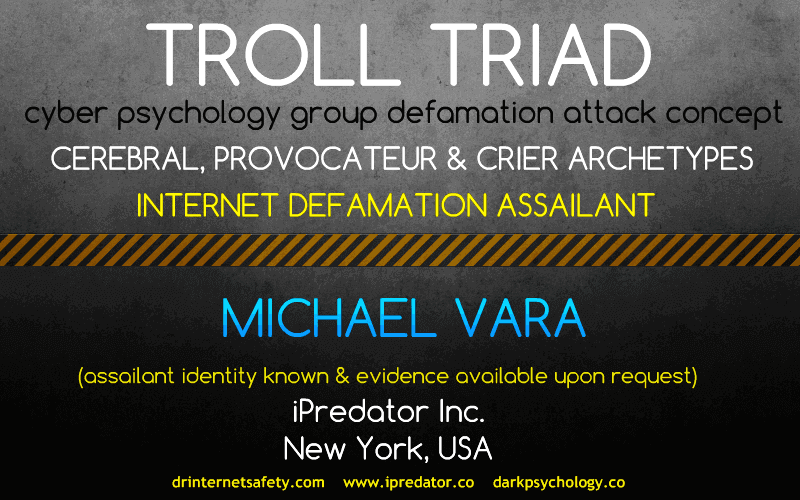 iPredator Inc., https://ipredator.co, does not represent or endorse the accuracy or reliability of any information, content or advertisements contained on, distributed through, or linked, downloaded or accessed from any of the services contained on this web page or website, nor the quality of any products, information’s or any other material displayed, purchased, or obtained by you as a result of an advertisement or any other information’s or offer in or in connection with the services herein. You hereby acknowledge that any reliance upon any materials shall be at your sole risk. iPredator Inc., https://ipredator.co, reserves the right, in its sole discretion and without any obligation, to make improvements to, or correct any error or omissions in any portion of the service or the materials.